You all know I love to spread the gospel of the sticks and the string. When I left the U.S., one of the most difficult goodbyes was to my knitting students and to the discretionary time that allowed me to teach knitting. [I might be able to do it in the UK in a little while, but for now I just don’t have the space in my calendar or my head.]

But I had underestimated the addictive quality of teaching people to knit, especially beginners. I love watching people go from non-knitters to knitters. It’s especially fun to teach hats, because they can be completed relatively quickly, and there’s nothing more exciting to a new knitter than a completed project. And poor Mallory walked right into this gaping maw of knitting teacher need about a month ago. She’d knit a scarf before, but that got repetitive and boring.

Aside: I do wish we could come up with a better first project than a scarf. Maybe a kerchief (head or neck) or a seamed cowl would work. I know exactly why we have people knit scarves – lots of practice, big long rectangle – but I have had so many people come into my classes who learned to knit long before, got bored with their scarves, and almost never came back. I myself learned to knit a few little squares, and then socks. But that’s another story for another time. 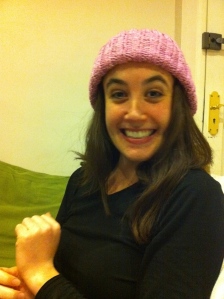 First hat! Check out the excitement on her face.

Anyway, the sentence “I might like to knit sometime” was barely out of Mallory’s mouth before I was racing upstairs to grab yarn and knitting needles before she changed her mind, Mr. Trask cheering me on as he saw another opportunity for me to give away yarn.

[Let me just say that Mr. Trask really took one for the team here. We were having a Justified marathon, not a very girlie endeavor, and then suddenly he was watching TV with not one but two knitters…girl knitters, in fact, who kept muttering to each other about “bring the yarn to the front between the needles” and “don’t worry, you’ll only be knitting on two of these DPNs at once.” Mr. Trask is a very patient man.]

We started with a simple ribbed hat made of leftover pink yarn from my Tea Leaves Sweater (which, by the way, turned out just fine, and I really should post a photo or two). Then Mallory had the nifty idea to make a wavy hat, shifting the ridges of the ribbing every row or so, and we found some delightful green yarn in my stash. Then I lured her back to scarves with the Irish Hiking Scarf, a simple cabled number, and now she is working on a top-down sweater by Stefanie Japel. We made her first foray into yarn shop joy a couple of weeks ago, dropping in to Port Meadow Designs for some gorgeous Mirasol yarn for her sweater. 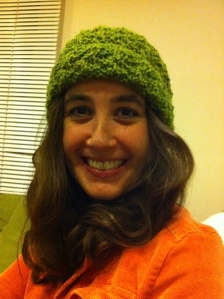 Mallory’s second hat – with a pattern she improvised herself.

I’m luring her even further into the knitting abyss by convincing her to make an Albers Cowl while working on the sweater (you know how nice it is to have a mindless project as well). Soon, she will have two projects on the needles at once! A rite of passage indeed.

Anyway, I thought now might be a good time to post some links that I usually give out in my beginning classes. And I got all excited about the internet and found some other items as well. Here’s what I came up with. What would you add to the list?

One last thing: I know you all are wondering what happened to the pink yarn left over after Mallory made her first hat. Right? Right? The answer is that it became my first baby project. I know, I know, I said the first project would be out of the Alisha Goes Around, but you all gave me so many choices for that yarn that I still haven’t decided. Also, this yarn was pink. And we’re having a girl. So the last bits of this yarn seemed destined to go to her.

In the comments yesterday, my father suggested I show the results off to you guys. So here are a tiny hat and socks:

A little hat and little socks, for the little girl who will come in July.

And here are some links to help the beginning, and not-so-beginning, knitter.

Answers to Your Beginning (and not-so-beginning) Questions:

June 21, 2020
Hi, thank you for visiting knitlikeyoumeanit.com. I do not own these designs from my website, I only share the best free patterns for you. Our site was created to promote outstanding authors and their work. We do not feature our own designs but our editors' selection.
Contact us: [email protected]